As we discuss in another article, legislation extending the coverage of anti-money laundering/combating financing of terrorism (AML/CFT) regulations to include cryptocurrencies is already at an advanced stage in Poland and at the EU level.

One of the key aspects of the changes is adoption of a definition of “virtual currencies.” This is an essential step, as in effect such a definition will appear in the legal systems of all EU member states, including Poland. Although in theory the definition is to be adopted only for purposes of the AML/CFT regulations, its application in other fields of law, such as tax, cannot be excluded.

The practical scope of this definition will be a major issue. After all, it’s not easy to define virtual currencies precisely. So let’s examine the definition more closely.

Under the current draft of the 5th AML Directive, “virtual currencies” are defined as “a digital representation of value that is not issued or guaranteed by a central bank or a public authority, is not necessarily attached to a legally established currency, and does not possess a legal status of currency or money, but is accepted by natural or legal persons, as a means of exchange, and which can be transferred, stored and traded electronically.”

Meanwhile, the draft of the Polish act defines “virtual currencies” as “a digital representation of value which is not: 1) a legal means of payment issued by the National Bank of Poland, foreign central banks or other public administrative bodies, 2) an international settlement unit recognised by an international organisation and accepted by countries belonging to or cooperating with the organisation, 3) electronic money within the meaning of the Payment Services Act of 19 August 2011, 4) a financial instrument within the meaning of the Act on Trading in Financial Instruments of 29 July 2005, or 5) a promissory note or check, and is exchangeable in commercial turnover for legal means of payment and accepted as a means of exchange, and also can be transferred, stored and traded electronically.”

The definitions are similar, but we will break them down into their prime factors: 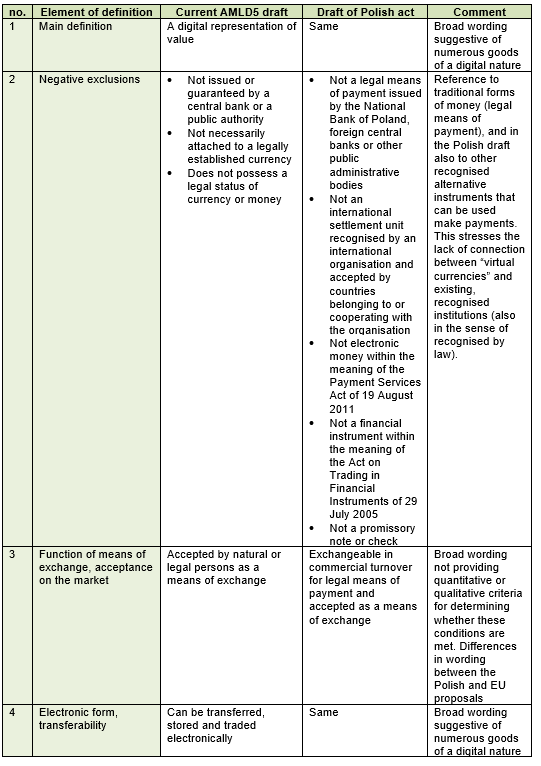 In practice, element 3 will take on key importance, but it is phrased generally and does not provide qualitative or quantitative criteria for determining whether, for example, a given token is accepted on the market. It is hard to say how many entities must accept such a token as a means of exchange, or whether incidental transactions using the token would also fulfil this criterion.

Theoretically it should be easier to determine whether a given type of token is “exchangeable in commercial turnover for legal means of payment” (a criterion from the Polish bill but not including in the proposed directive). If there is no exchange offering the pairing of a given token and a traditional currency, then theoretically this condition will not be fulfilled. The current standard is that many cryptocurrencies and tokens can be exchanged only into major virtual currencies such as BTC or ETH, which in turn can then be easily exchanged for traditional currencies (and both exchanges can be conducted instantly). So in practice this criterion is unclear.

As is apparent from the analysis above, the boundaries of the definition of “virtual currencies” are indistinct. Even more doubts can be raised. For example, it is uncertain whether the definition covers various “currencies” in online games. The draft AMLD5 mentions that the definition does not cover such currencies if they can be used exclusively within a specific game environment. The current Polish draft says nothing about this, even though it was previously planned to exclude such currencies from the proposal.

In the world of blockchain technology, 2017 was a year of incredible growth in tokens (more on tokens here). Although technologically similar to cryptocurrencies, and also using public blockchains like Ethereum or Waves, tokens have many new applications, including outside the financial market. The vague boundaries of the definition of “virtual currencies” force us to consider whether AML/CFT regulations will apply to tokens. There are no definitive answers. Thus the creators of projects using tokens (e.g. distributing tokens during ICOs) must take the new regulations into consideration.